Do you want to buy an artpiece from Hero de Janeiro? Please take a look in our shop

Hero de Janeiro is, as its name suggests, a real hero, but luckily for the Dutch he is from Amsterdam. Hero is a cheerful and sociable person and we recognize this in all his works. He makes fashionable StreetArt that we see often in the streets of Amsterdam. That these works sometimes only remain on the streets for several hours, indicates that the works are highly wanted. Therefore we see him as a real Amsterdam StreetArt Hero. Hero’s common characters are Jip & Janneke, the 17th century soldier and Karl Lagerfeld who all have a ghetto blaster, as an attribute, with them. The use of the ghetto blaster refers to Hero’s musical side, because at day he entertains the people with his artworks, and at night he lets them dance at his Hero beats. 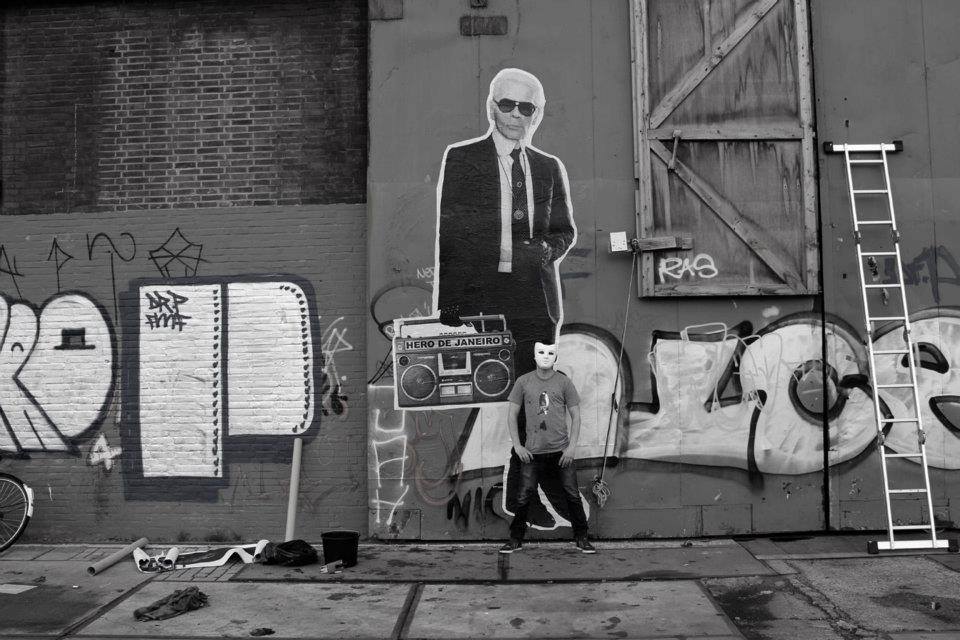 Not only can his works be found in Amsterdam, they also appear in cities all around the world. They all should consider themselves lucky with the happy- making works that were placed by the artist himself. His work can be described as very recognizable, unique and uplifting.

Watch this movie if you want to see Hero de Janeiro at work.

The smaller works he completes with varying frames that he paste against the urban walls and the larger works, made out of stencils, are directly attached to the wall. One thing they have in common is that they all give you a happy feeling. For StreetArt.nl he therefore chose to make a frame that is summer- colored and he used the figures with which he is best known in and around Amsterdam; Karl Lagerfeld, Jip & Janneke, the tough penguin, the 17th century soldier and the Dutch milkmaid. We have chosen to sell these works because they represent Hero de Janeiro as we know him best. The works come from larger series, however, the frames are all unique and especially made for StreetArt.nl and we sell nr 1 till 10. The whole idea is to let the spectator smile therefore this ideology is reflected in the price. For only €30 (euro) you are the owner of a real Hero de Janeiro artwork. They are all numbered and signed! Have fun with it!