Isaac Cordal (Spain, 1975) is a master of miniature and lets you reflect on the world in which we now live. Cordal currently lives and works in Brussel. Cordal is known for his little sculptures called Cement Eclipse. Cordal is interested in creating prototypes that represent human beings in modern society. His intriquing sculptures are installed in plurality in the urban environment. The works show human behavior which is very familiar to ours. Daily life, news, social mass and current society problems are his inspiration for these sculptures.

Through a critical look to the collateral effects of our evolution, and our devalued relation with the nature, the sculptures intend to catch the attention of passers-by. The scenes zoom in on the routine tasks of contemporary human being. Cement Eclipse grabs the absurdity of our existence. These small sculptures contemplate the demolition and reconstruction of everything around us. They show fragments in which nature maintains encouraging our symptoms of survival. With the simple act of miniaturization Isaac Cordal as stage director almost magically reaches the imagination of his viewers. By placing his almost human sculptures on thoughtful places in the public space they open doors to other worlds. 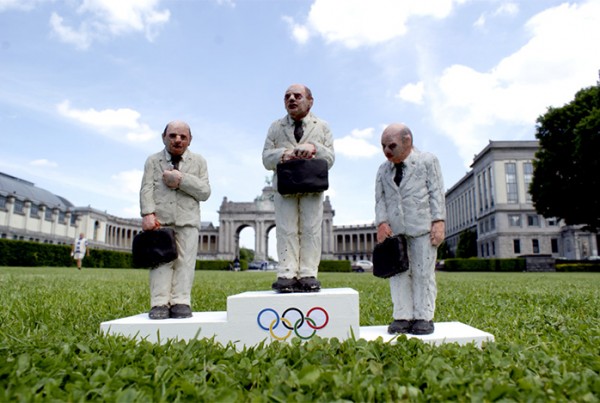 Isaac Cordal is sympathetic toward his little people and you can empathize with their situations. Their human acts and happenings 'humanises' them. Their leisure time but also their more tragic moments such as accidental death, suicide or family funerals makes them connectable with us.
Cordal installed these tiny installations in cities around the world. The sculptures can be found in many (un-)usual and (un-)likely places as in gutters, on top of buildings or in a rain puddle. Cordal once said once: "I don't leave them on the street for people to take; street art is for everyone, not just one person". After he installed his in-situ artwork he takes pictures and leaves them behind to be spotted, ignored or drifted away.