The creative Dutch duo Pipsqueak was Here!!! impose no restrictions on themselves. They work on and with various materials and enrich the world with their playful, colourful and meaningful walls.

Both artist work in the same discipline. Concentrated, accurate and from their intuition and inspiration. The combination of these two talented artists ensures a harmonious and colorful image, often with a strong message. 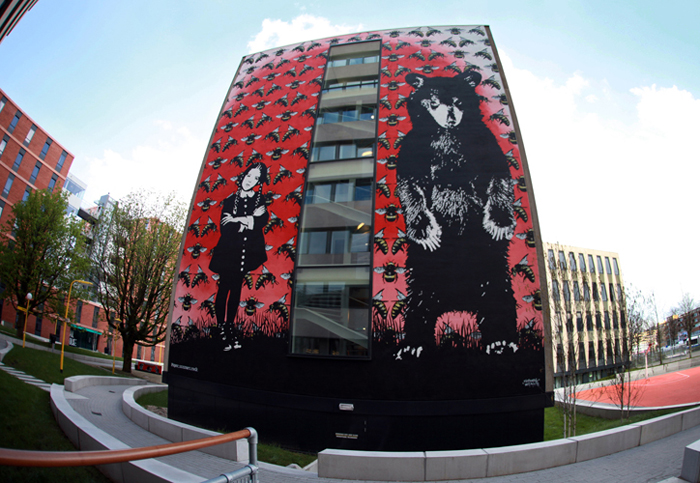 Pipsqueak's works range from miniatures as 'Sleeping Giant' to whole sides of buildings as 'Paper, Scissors, Rock' for the Student Hotel in Amsterdam. In 'Paper, Scissors, Rock' we see a girl, a bear, and many bumblebees in the background. With this image the artists want to show that every being has a related dependence and infighting with each other. The bear eats honey and needs the bumblebee for that. The bumblebee gets banned by man because of the use of pesticides, but man also need the bumblebee for the pollination of crops. Man threats the habitat of the bear, but when they meet in the wild the bear is the winner. Every being is dependent on the other, and without each other the natural balance in the ecosystem is disrupted. 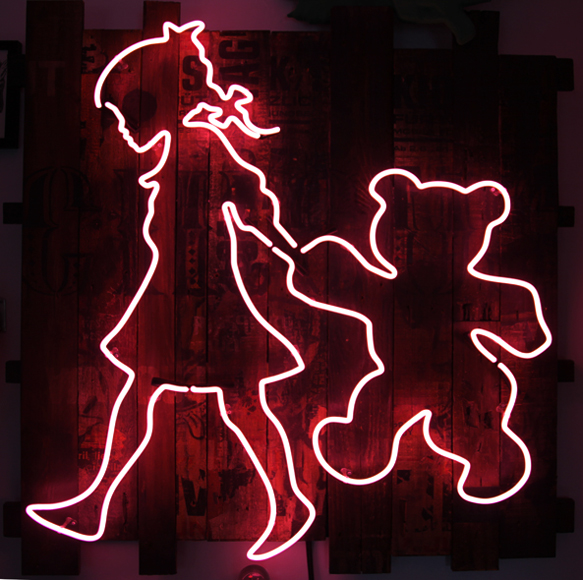 Pipsqueak use a wide variety of materials, like canvas, recycled wood and neon. But also skateboards, cars, scooters, and viaducts are provided with the most beautiful creations. Often as commissioned works, sometimes as donation to the environment. They work with stencils, paint with brushes or rollers and they make use of collage and 'solvent transfer'. 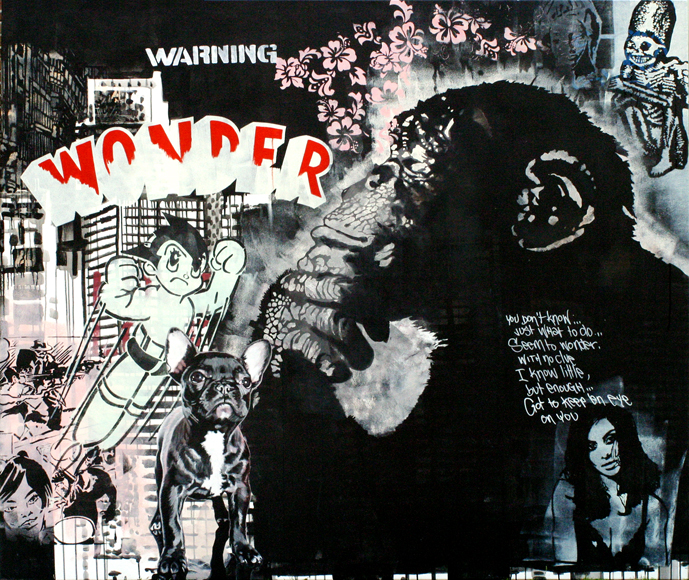 'Dream on' by Plusminus Produkties

Since 2008/2009 the duo works under the name Pipsqueak was here!!! This name was chosen deliberately. A ' Pipsqueak ' is a small, unimportant person no one pays attention to. By adding 'was here!!! ' the pipsqueak gains extra importance in all of his insignificance. 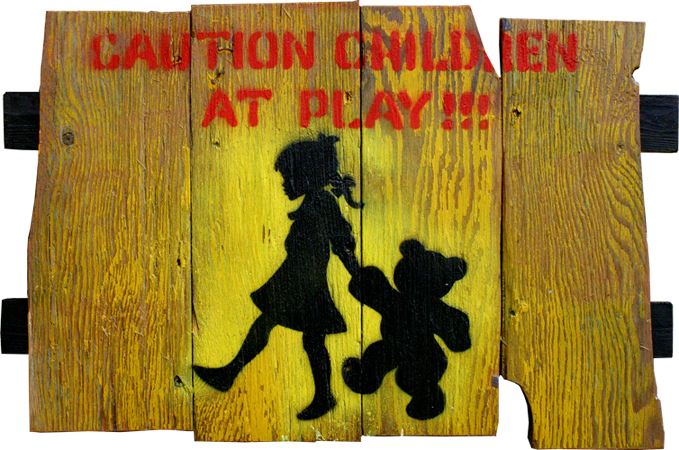 Contradictions are still central to the work of Pipsqueak was here!!! In their logo they have a girl and a bear. This acts as a metaphor for the relationship between mankind and nature. The original image comes from a warning sign ' Caution children at play ' from the fifties, which they encountered during a visit to Maui. The image of a girl and a bear is a recurring theme in their work. ' Sometimes you eat the bear, sometimes the bear eats you'.

'Here there be monsters'

They have continued their use of bold colours and their technique of working with many layers. The extra layer they addes was that of depth: the search for achieving awareness, inciting thinking and spreading a message. 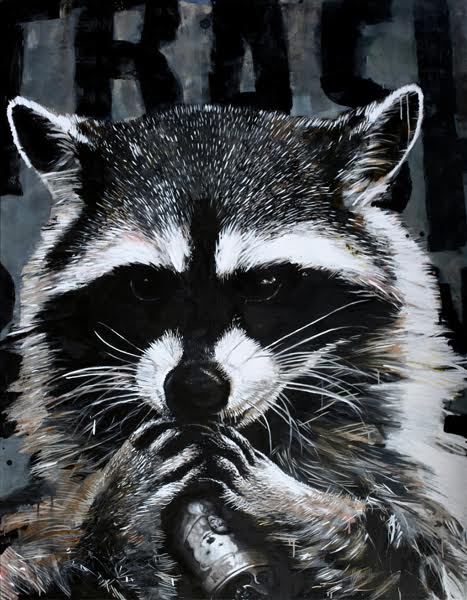 'One mans trash another mans treasure'

The topics appear innocent and alluring, but address very serious matters. As a result, they grab full attention and in this way they hope to improve the world. 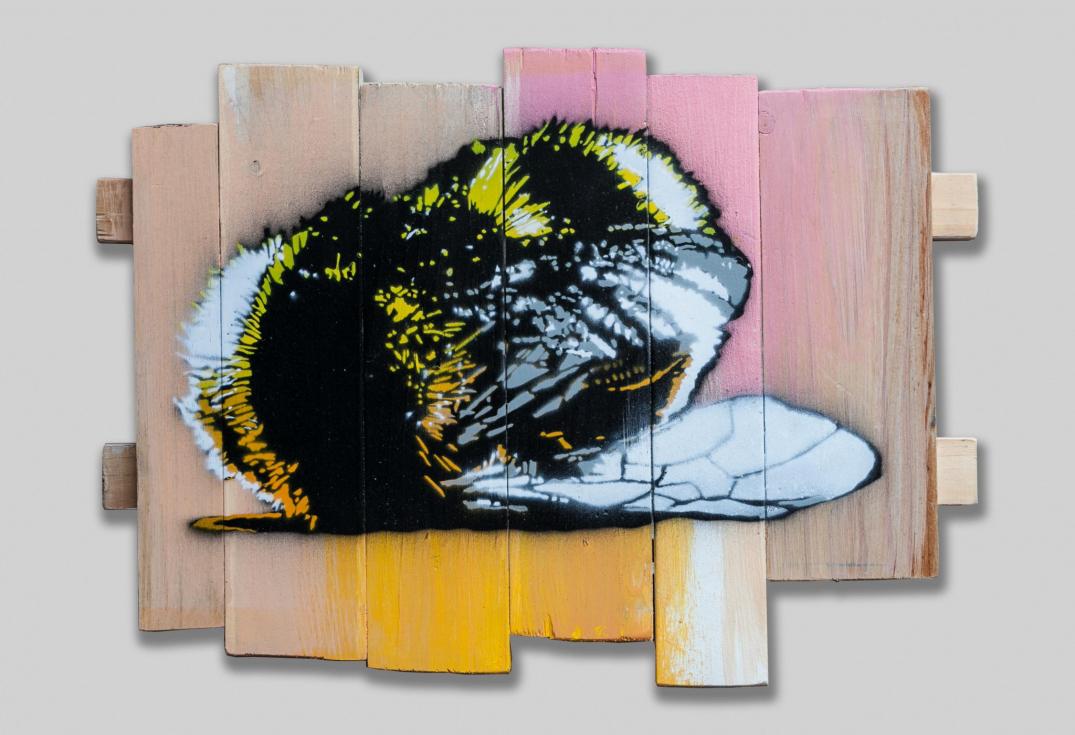 Pollution, pesticides, mites, viruses, weather conditions and bears are reasons that are listed for these phenomena. But currently, there is a larger threat to the bees, namely the emergence of genetically modified crops. These cannot be consumed by the bees, forcing the bees to leave their colony in search of better food.

The bumblebee that is depicted here and in 'Sleeping Giant ', is a genus of bees in the family Apidea. At this time of year many helpless, exhausted bumblebees can be found. One explanation for this is the increasing food shortage that arises because different types of bees fight a fierce competition in nutrient-rich areas. 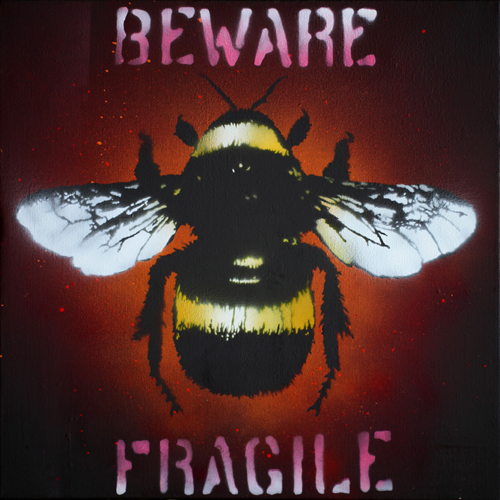 Because of their sturdy, somewhat ungainly construction, bumblebees are less energy-efficient than smaller, more agile species. For this reason they often draw the shortest straw in this competition for food. In addition, bumblebees are often too late to notice they’re short on energy, which leads to them running out of steam before finding a new food source. Their energy consumption is larger than the amount of energy they ingest when foraging, leaving the bumblebee slowly starving.

The starving of bumblebees is largely caused by the influence of man in nature. Although mankind acknowledges the importance of natural pollination by bumblebees and bees, they follow a course of action that is contrary to the intended purpose. Many orchards are equipped with beehives, where honeybees can flourish. As a result, the increasing number of honeybees forces the bumblebee from this habitat, often to their death.

With ' sleeping Giant ' Pipsqueak wants to create awareness in humans. The bumblebee is of huge importance in our ecosystem. 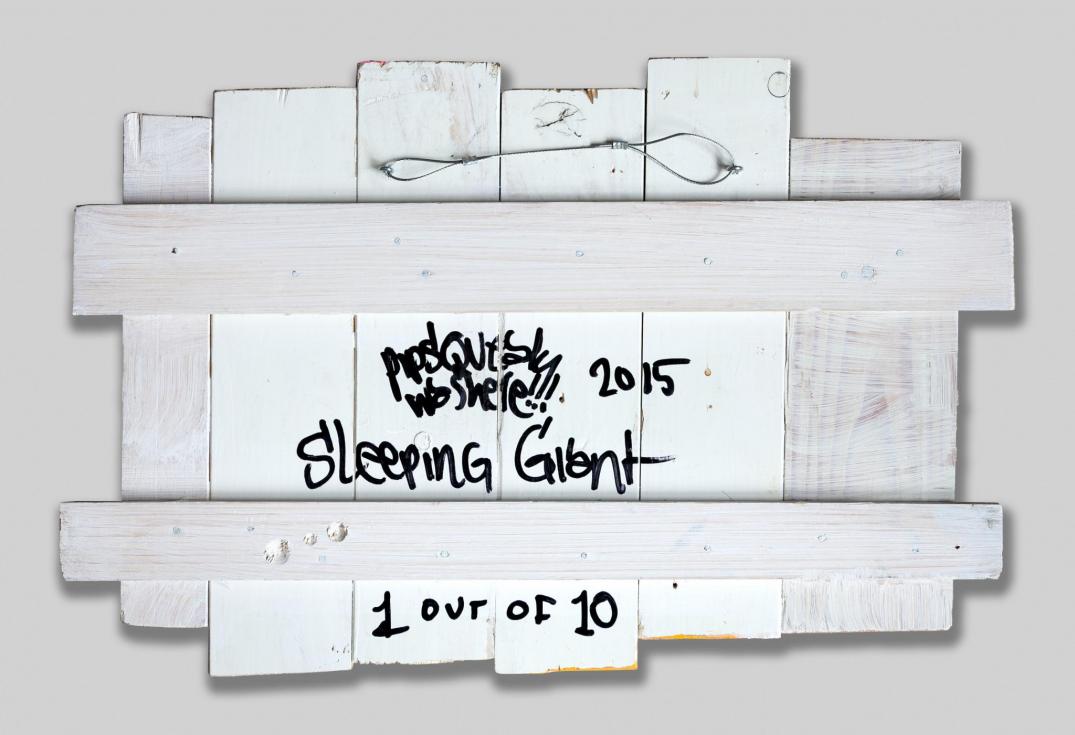 The artwork is made on panels of recycled wood. Every work is unique, signed and numbered as 1 in a series of 10. The background colours of the works differ slightly. The works will be sold in random order.